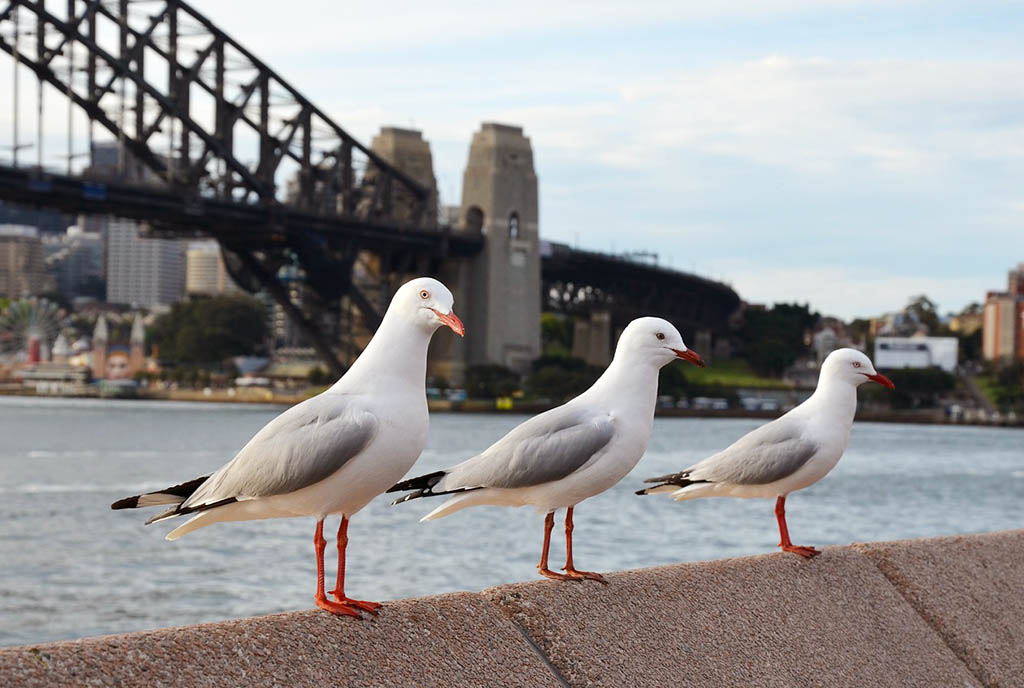 Sydney is the biggest, most populous and most well known city in Australia. Increasingly built up over the past few decades, green space has rapidly diminished as humans have moved in with their bulldozers and their homes; a story all too sadly familiar the world over.

So are there any birds left to see in Sydney? If so, where do these birds live?

Bird lovers can still find and enjoy places of serenity in or close to Sydney (depending how serene you’d like it to be; after all, completely escaping human sounds and influence is very difficult to do in a large city).

Seagulls near the Sydney Harbour bridge

Sydney is quite unique in that it’s surrounded to the north, west and south by large tracts of forest or bush land which are largely designated as national parks. Needless to say, many of these are popular with locals and visitors alike and some of the more easily accessible locations can get exceptionally busy.

Besides the large national parks bordering sprawling Sydney, there are also small patches of habitat throughout the suburbs which provide good bird watching and photography opportunities.

So if you’re visiting Sydney and plan to stay for any duration of time from one day to one month – there’s a lot of birds to see and plenty of choices in places to visit.

Sydney gardens and parks are frequently visited by colorful parrots and other birds, so you might not have to venture far to see some of then more common birds. If you have more specific target species in mind, it’s worth consulting a database like eBird to get up to speed on what might be found and where.

Let’s look at 21 of the best locations to see and photograph birds while in Sydney. Some are well known, others you’ve probably never heard of. All are worth a visit!

The vast wilderness of the Blue Mountains west of Sydney Australia

This park is a portion of a much larger wilderness area. If time is short, there are plenty of interesting tracks and well maintained walks to explore in the Blue Mountains that don’t require extensive fitness or hiking experience. Of course, if you have the time or desire to venture out further; an almost endless vast wilderness awaits as you “go west” into the mountains.

Situated amongst heavily built up beachside suburbs, the Long Reef Aquatic Reserve provides a small but important haven for many bird species including sometimes some of the rarer migratory birds who have lost almost all of their habitat in this part of the country.

Australia’s first national park, “The Royal” is a big patch of green below Sydney’s southern suburbs.